Is it too late to plant herbaceous perennials?

Last spring Judy and I were invited to visit a newly created garden in Warwickshire that had been planted up the previous autumn, and we were shocked to see many apparently hardy plants had been killed by last winter’s frosts.  Obviously, when we design a planting plan, we are careful to select plants that are suitably hardy.  So what caused these plants to succumb last winter?  (It wasn’t one of our designs, by the way.) And if we plant new herbaceous perennials now, will they suffer the same fate this winter?

It’s the formation of ice crystals, which rupture the plant’s cell walls, that causes frost damage.  Some plants are not at all hardy, whilst others are hardy to varying extents.  A plant’s ability to withstand freezing temperatures derives from its physiology and acclimatization.  Hardy plants use certain “tricks” to help withstand frost, including:

Importantly, hardy plants generally deploy these survival techniques as a reaction to shortened daylight hours and lower temperatures.  This process takes time (which is why locally grown stock is hardier than plants imported from somewhere warmer).  New growth is more susceptible as the cell walls are thinner and, by implication, growth means warmth and so less time for acclimatization.

Last winter was characterized by some very severe frosts – down to -15ºC here in south Wiltshire – and the frosts came in late November, which is early for such severe frost.  It was the combination of (early) timing, and severity, which was to blame for the damage.  The cold weather also lasted for a considerable time – several weeks – which allowed the frost to penetrate deep into the ground, reaching roots that would normally remain frost-free.

And what about soil water content?  Well, it is certainly true that wet soil will lose heat much more quickly than dry soil, and so will allow a frost to penetrate deeply.

OK, enough science – is it too late to plant?  No, it isn’t.  In fact, as long as the plants are sufficiently mature (not just new growth) and have been properly acclimatized, there is no scientific reason why you shouldn’t be able to plant all year round (as long as the ground isn’t frozen solid!).  As they start to go into dormancy, plants are less likely to suffer from the “shock” of transplanting, and there’s still plenty of warmth in the ground at the moment for the roots to get established.  Another great advantage is that autumn transplants are much less likely to suffer from drought.  Of course, it does all still rely on adequate soil preparation, but that’s another story.

But, and here’s the catch, how do you know if your new plant purchases are acclimatized? Perhaps they arrived on a lorry from the continent only yesterday!  (And that little locally propagated 9 cm pot may be much cheaper than a 2 litre pot, but is the plant mature enough to survive a sharp frost? )  The one thing I certainly wouldn’t do now is pot on from 9 cm to 2 litre, as the pot will be much more susceptible to frost than a plant in the ground, and it’s quite likely to put on a growing spurt that just won’t be mature enough to survive weeks of snow and ice. 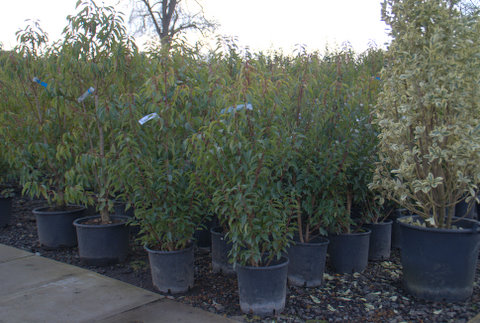 But if you’ve prepared the ground well, then I’d say “go for it!“.   (And as for what caused the losses in the Warwickshire garden?  Well, my money is on plants newly arrived from northern Italy.)

3 Responses to Is it too late to plant herbaceous perennials?