Most days I take the dog for a walk over Fovant Down, and around this time of year the grassland bursts into a mass of wild flowers.  It’s all too easy to look no further than the familiar buttercups and daisies, although you could hardly miss the sea of yellow cowslips (Primula veris) from mid April.

Bright blue clumps of chalk milkwort (Polygala calcarea) follow on soon after.  But a closer examination reveals plenty of other surprises.  In amongst the blue chalk milkwort are scattered clumps of white, and even occasional pink forms. In the more shady spots, next to the scattered blackthorn and hawthorn clumps, there are blue flowers of a different kind – germander speedwell (Veronica chamaedrys).

Amongst the ubiquitous buttercups are plenty of “dandelions” (Taraxacum) – but on closer examination these are not all the same: with over 200 species and microspecies, telling one from another is a science in its own right.  Experts are known as “taraxacologists”.  But that isn’t the end of it: not all of those familiar yellow flowers are dandelions at all: the rough hawkbit (Leontodon hispidus) is a common plant on calciferous grassland, distinguished by its hairy stem, as is the mouse ear hawkweed (Pilosella officinarum) which has leaves that are… well, more like rabbit’s ears, actually.  And then there’s the beaked hawksbeard (Crepis vesicaria).  And…. well, let’s just say that on unimproved chalk grazing many of those yellow flowers are probably not dandelions, which tend to prefer disturbed ground.

With so many buttercups and dandelions, hawksbeards and hawkbits etc., it would be easy to miss some of the other yellow flowers.  Birdsfoot trefoil (Lotus corniculatus) is sometimes known as “eggs and bacon”, because of its mixed yellow and orange colours.

Kidney vetch (Anthyllis vulneraria), with its protective fluffy calix, is one of the few plants that can survive on virtually bare chalk, which is probably why I found it next to the worn path. It’s also vital for the small blue butterfly Cupido minimus.

There are plenty more flowers to come as the summer progresses; these are just the ones I photographed today.  Indeed, ancient grassland on the chalk downs, lightly grazed by cattle, is probably richer in plant species than any British woodland, and it is a top priority habitat in the UK Biodiversity Action Plan. 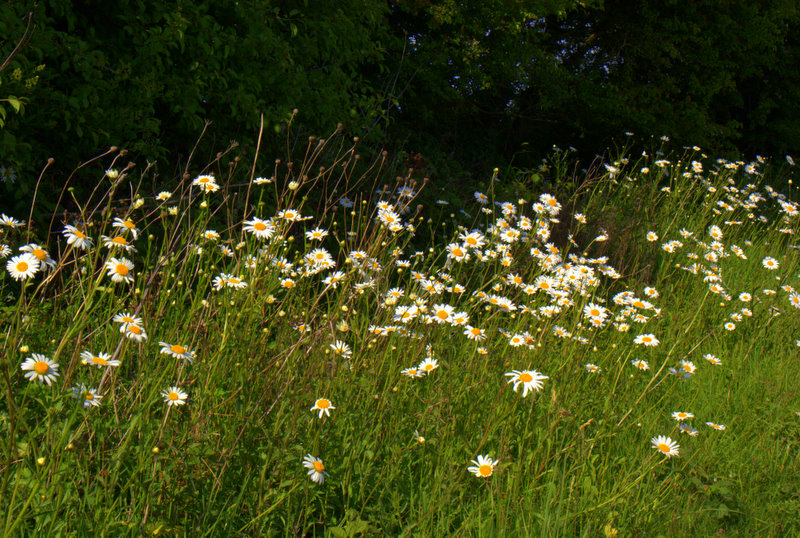 This entry was posted in Agriculture, Wild flowers. Bookmark the permalink.